Reflection on the Strike of Provincial Crown Companies

I.                    Situation
The strike broke out in late September 2019 and lasted for 17 days for the most of the crown companies including DirectWest, SaskTel, SecurTek, SaskEnergy, SaskPower, and SaskWater, involving about 5,000 employees. The 138-member Water Security Agency had reached an agreement with the government a little earlier, agreeing to a wage freeze in the first two years[i]. 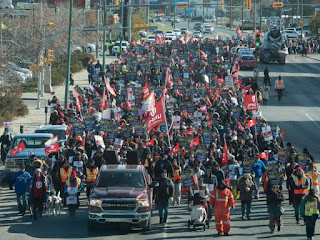 Customers also complained about the shutdown of the SaskTel customer service at Cornwall Centre, and restaurants near the picket lines complained about a loss of about 20-30% profits weekly.

As the economy was still sluggish, many could not even find a job, let alone earn a decent salary. Also, there are many workers who do not have a labor union to back them up. Some people say it would be unfair for the rich to get richer, and the crowns’ labor unions are becoming a legal mafia to kidnap the general taxpayers; others say you deserve it if you don’t organize a labor union. When the labor union is addressed, experts may argue on whether it is still representing the workers in general.

II.                  What Resulted in the Strike
Before the strike, news was spread that MLAs and managers at the crowns got a 2.3% raise in their salaries. Although the provincial government proposed a raise of 5% in 5 years with a freeze in the first two years, the union suggested a 2% raise in 3 years plus a lump sum payment. This seems more than the present MLAs take in the past five years (respectively 0, 1.6%, -3.5%, 3.5% and 2.3%)[ii]. Later on, the union agreed to return to work on a 24-hour notice of strike, which the management simply declined and decided to lock them out.

III.                Possible Solutions
Three possible solutions are: a quick settlement, a slow settlement and no action. A quick settlement seems the best solution as all the parties will benefit, which will also improve the welfare of the general public. Furthermore, the provincial government will not be put in a legal dilemma or financial uncertainty. No action will not only bring forward future uncertainty but also may entangle more losses.

IV.                Result
The result is a slow settlement for most crowns: a return to work on Oct 21, 2019 after reaching a seemingly fair and mutually beneficial agreement through a complicated round of bargaining. The management declared that they found ways to beat the mandate. However, harms has already been done with leaflets being distributed at SaskTel dealers across the province urging them to switch business elsewhere and with picket lines bolstered at the Poplar River Power Plant in Coronach, SK[iii].

V.                  Analysis
It is observed that the union people may not really represent the workers as they have gradually become a special interest group who can seek rent and get partial with some of the workers. Also, in areas like public transportation, utilities, and public services, strikes should be limited both because there are some essential services and because that the welfare of the whole country may suffer (like in the US). Therefore, regulation and laws may be revised to protect these areas. Moreover, professionals in negotiation and strategy need to be well prepared before these negotiations.