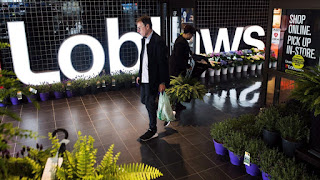 Abstract: Grocery chain Loblaw Companies Ltd. has announced the closure of distribution centres in Laval, Que., and Ottawa. With the rapid growth of online shopping, thousands of consumer electronics, furniture and sporting goods stores are being closed, and GNC has reduced store space to save money and support the opening of higher performing stores. Many employees have to be laid off. Canadian retail sales growth continues to weaken due to market shrinkage. Traditional malls lose favor with shoppers with Sears waving goodbye, and the declining foot traffic means more lost revenue, which leads to more store closures. Showroom shopping adds insult to injury. Online shopping is not only convenient, but also economical especially for some of the high value electronic products. Price can be said to be the first reason to shop online. If handled well, business investment can be expanded, and employment can be increased with "random consumption" generated on both occasions. Though Amazon’s emergence seems to have doomed bookstores business, it can hardly be said that the online economy hurts the offline economy.
It is sad to see retail businesses shut down and employees laid off. However, the online economy should be embraced and relative policies should be designed to cope with the new situation.

I.                    Brief Situation
1.       Business Shutdown
With the closure of Sears and Zellers, Lowe’s (including RONA) also shut down its 34 Canadian branches in November, 2019[1]. Grocery chain Loblaw Companies Ltd. has announced the closure of distribution centres in Laval, Que., and Ottawa[2]. In the US, UBS estimates that as many as 75,000 stores will close by 2026, including more than 20,000 clothing stores and about 10,000 consumer electronics stores. With the rapid growth of online shopping, thousands of furniture and sporting goods stores will also need to be closed. Even booming retailers such as Wal-Mart (WMT) and Best Buy (BBY) have quietly closed a few stores, although these companies are also opening some. Department stores such as Nordstrom and Kohl's have also closed[3].

2.       Large-scale Layoff
The closure of Loblaw’s distribution centres will result in the elimination of nearly 800 jobs[4].
About 545 employees north of Montreal will be affected by the end of 2021 as the distribution centre is relocated to the automated complex of an Ontario subcontractor. The grocery chain is also shutting a warehouse in Ottawa that will impact 230 workers.

3.       Reduction in Space and Reallocation of Resources
GNC has Reduced store space to save money and support the opening of higher performing stores[5]. Some other stores may be following suit.

II.                 Reasons
1.         Market Shrinkage
The latest numbers from Statistics Canada show that Canadian retail sales growth continues to weaken. For the 3 months ending August 2019, retail sales gained a mere 1.0% year-over-year on a not seasonally adjusted basis. After 8 months of 2019, or 2/3 of the year, year-to-date Canadian retail sales are up only 1.8% compared to a year ago. Current trends imply things are going to get worse before they get better. Most of the bad news however is coming from the Automotive & Related sector, due to declining gasoline station sales combined with very modest growth at new car dealers. By comparison, the Store Merchandise sector is not doing too badly and is managing to keep its head above water[6]. According to some experts, retail sales have been slowing across the country in recent months, and 2020 is expected to be more of the same. Sales are projected to grow 1.3 to 1.4 per cent next year, which would make 2020 the worst year in retail growth since the global financial crisis in 2009. Durable goods sales such as automobiles have also been stagnant for the last half of 2019, and there is little sign of relief in the near future[7].

2.         Structural Problems
1)        Industry Shift
A great number of malls were certain to fail in such an oversaturated retail environment. As some of a mall's stores begin closing—especially anchor tenants such as a Sears—the mall loses favor with shoppers, and the declining foot traffic means more stores lose revenue, which leads to more store closures. The recession has also caused shoppers to stretch their declining or flat disposable incomes at lower-cost, big-box stores, such as Walmart, that are generally not located in traditional shopping malls. According to observation done by the writer at Cornwall Centre in Regina, there were 81 adult visitors and 16 accompanying children coming into the mall from the main entrance during the period from 10:30 to 10:45 am on January 25, 2020 (Saturday). Assuming there would be $15 of average consumption per adult and $10 of average consumption per child and that the customers from the back entrance account for 1/3 of the total, the income the mall would get on an average Saturday would be $78,735 = $1,375*9.5*4*1.5, which should barely cover the expenses for the mall. Furthermore, younger people begin to change their spending preferences from things to experiences. Fun shopping excursions can explain why malls that offer diversions like roller coasters or aquariums have outperformed their retail-only peers[8]. A poll found 55 per cent of Canadian shoppers showroom shop. Consumers aged 18-34 are more likely than older people to do it, with three-of-four admitting to having done it. CFIB Prairie Region Director Jonathan Alward said it’s not just the local economy that will suffer. He said there could be social consequences if communities lose its storefronts[9].

2)        Customer Preference Change
With change of custom and fashion there come new preferred products and services. Brands’ and retailers’ pursuit of greater inclusivity is no longer about just marketing, as shown in product offerings in both luxury and the mass market in 2020. Growth in niche and tailored segments within apparel and beauty is envisaged[10].

3.         Emergence of e-Commerce
Take the US as an example. There is the continuing trend of Americans making purchases online. Consumers enjoy the freedom of shopping on their computer or mobile phone and avoiding trips to a store that may not have had what they were looking for anyway.

As of the first quarter of 2019, e-commerce purchases accounted for 10.2 percent of all retail sales, according to the Federal Reserve Bank of St. Louis. That percentage has risen steadily since 2000.
Amazon.com, the largest U.S. e-commerce company, had about 103 million paying subscribers to its Amazon Prime service in March 2019. That figure represents about 80 percent of U.S. households[11].

UBS analysts estimated in a research report that online sales now account for about 16% of total retail sales, but will increase to 25% by 2026[12]. The author contributes the change to the following two reasons:
(1)      Price
Online shopping is not only convenient, but also economical especially for some of the high value electronic products. Price can be said to be the first reason to shop online.
(2)      Customization
Sometimes shoppers cannot find their products in the local stores or not as many as they want. Therefore they go online to solve the problem.

4.         Management Problems
The rise of online purchase may just contribute to part of the dilemma for retail businesses, high debt ratio, high rents along with poor management may have become to last straw. Past history shows a large-sized store front and a fashionable décor may not win customers as much as before.

III.               Actions Recommended
1.         Structural Adjustment
The online economy has the advantage of diversity and price competitiveness but the shortcoming of the inability to check the quality, quantity, to immediately gain experience and consume on the spot. Therefore, it may be good advice to make full use of the competitive advantage for each of the offline and online economies. For example, restaurants of hot pots, barbecues or buffet and service shops like a milk tea shop, a massage shop, a pet hospital, an interior design shop, a place for marriage or notarization may only be put at a physical location.

2.         Dual Mode Operation
The physical retail business and the e-Commerce are independent of each other, yet they also affect each other. If handled well, business investment can be expanded, and employment can be increased. If poorly handled, the phenomena described above can aggravate, putting many jobless. According to an English knight, the British government restricts e-commerce because the development of e-commerce will hurt the offline economy. The offline economy can generate "random consumption". For example, people may buy a drink or watch a movie when shopping for clothes. Therefore, the offline economy can better stimulate social consumption, promote public employment, and cultivate the middle class[13]. Though Amazon’s emergence seems to have doomed bookstores business, it can hardly be said that the online economy hurts the offline economy. Bookstores can always make some reforms and bring more cultural experience for the customers. Furthermore, if you believe the “lassez-faire” policy, the market can automatically adjust the supply and demand in these two economies. Therefore, the author suggests a dual mode for an average business so that it can take advantage of the benefits of both.

Actually, The Ontario automated distribution centre of Loblaw will expand to be among Canada's most modern distribution centres and an undisclosed number of workers will be added to handle the greater volumes. More than $1 billion to improve our business will be invested, creating new jobs and modernizing our workforce and stores[15].

Therefore, the government should design policies to encourage new innovative small businesses which can both stimulate the economy by helping other businesses along and enlarging employment.

With e-commerce growing, more and more people have shown their concerns. One is the online security, as private and sensitive information may be stolen very quickly without being noticed. This can be monitored with more third-party online security controls. Another would be the virtual financial market, which can be huge and controlled by a few capitalists with technology in their hands. This can be curbed with more transparency, supervision of the MPs, MLAs, public opinion and social media.

IV.               Conclusion
It is sad to see retail businesses shut down and employees laid off. However, the online economy should be embraced in general and relative policies should be designed to cope with the new situation.