What Should We Be Proud of on Pride Day (傲娇日我们应该为什么而傲娇)?

Abstract: Queen City Pride declares that this year’s Queen City Pride Parade is the biggest, brightest, and most colorful parade Regina has seen yet with over 4,400 participants and spectators lining every street! Canada was said to be the best country in the world due to its democracy, free religion and freedom of speech. While all immigrants will agree that they came to Canada for a better future, with rights and privileges and many opportunities they may not enjoy in their home country. However, their expectation may have been too high. Freedom without boundaries is dangerous and misleading. While something can be tolerated, but advocating it and encouraging children to practice it may bring in very severe problems and consequences. Misusing our rights and freedom would make you weak, puzzled and out of shape. We should promote the kind of pride in a good moral standing, the pride in honesty, bravery, volunteerism, and perseverance. The author is urging the government to re-evaluate our cultures and beliefs and learn from our past successes in dealing with external cultures and consider encouraging the traditional values and beliefs.

Queen City Pride declares that this year’s Queen City Pride Parade is the biggest, brightest, and most colorful parade Regina has seen yet! With over 4,400 participants and spectators lining every street, Queen City Pride feels proud of the support Regina has shown[i]. Some people may question why some of the Conservative leaders both nationally and provincially were not present in the parade on Pride Day this year in Regina. 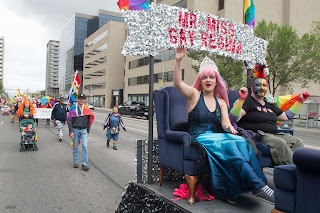 July 1, 2019 marks the 152nd anniversary for Canada, and the Mayor of Regina said Canada was the best country in the world at the Canada Day celebration opening due to its democracy, free religion and freedom of speech. All immigrants may agree that they came to Canada for a better future, with rights and privileges and many opportunities they may not enjoy in their home country. Nevertheless, when asked if they are satisfied with the present situation in Canada, the answer may not be Yes.

This article will explore what we should be proud of and what we should not be, the differences between some concepts, and a suggestion on what we could do.

I.                   What We Should Be Proud of
While we often hear of gun shots and bombings at schools or on the street in the US, we seldom hear of them in Canada (though there are more incidents recently). While many people are still fighting in the war in the Middle East, Canadians can enjoy their peace and harmony. While some children are dying of hunger in Africa and Asia, the kids here have enough food and nutrition. While in some areas in Asia, pollution is so severe that people catch chronic diseases, the people in the maple leaf country can enjoy a bright clear sunny sky. While you cannot leave a bible on a table in a hotel room in North Korea, you can go to a church and worship freely in Canada.

Therefore, here is what we should be proud of: a peaceful country, a democratic and liberal country, a clean and beautiful country, a tolerant country and a prosperous country.

II.                What We Should Not Be Proud of
Have we come across a situation that we thought the referee should give points to a basket ball team in a match when he actually didn’t? Have we experienced the problem as to control and quiet down a child in a class or at home? This is because we know that something is either obscure or not there, and that is possibly disciplines and order, and people can only enjoy their freedom and rights when certain rules are not broken.

Freedom without boundaries is dangerous and misleading. Lesbians and gays can be tolerated, but advocating homosexuality and encouraging children to change their genders may bring in very severe problems and consequences. Rosaria Butterfield considered herself an atheist, having rejected her Catholic childhood and what she perceived to be the superstitions and illogical of the historic Christian faith. She found Christians to be difficult, sour, fearful, and intellectually unengaged people. In addition, since the age of twenty-eight, she had lived in monogamous lesbian relationships and politically supported LGBT causes. But when she came to Christ, she experienced what nineteenth-century Scottish theologian Thomas Chalmers called “the expulsive power of a new affection.” At the time of her conversion, her lesbian identity and feelings did not vanish. As her union with Christ grew, the sanctification that it birthed put a wedge between her old self and her new one. In time, this contradiction exploded, and she was able to claim identity in Christ alone[ii].

Though we are entitled freedom and some legal rights, they are not to be misused. Misusing those rights and freedom would make you weak, puzzled and out of shape. Therefore, we should not be proud of having them when they tend to be misused. We should not be proud of holding guns, taking marijuana, changing our gender or engage in a homosexual life even though they are regarded as politically correct, which means they sound right diplomatically (so as not to offend anyone) due to their intentions to protect our individualism and liberalism. These things make us lose our original identity, bring the society into chaos and intoxicate the whole economy.

Queen City Pride celebration uses a special, particular meaning for "pride" which is different in significant ways from a more general and historical idea of personal pride (as in achievement, or good moral standing). To talk about the Queen City Pride celebration for LBGT community, their idea of pride is the kind of pride in being different and in being able to choose whatever they want to do. For years, they were "closet people" that were basically rejected as being abnormal, but now they are engaged in a struggle for acceptance and even political power.

III.             Distinction of Concepts
Often we have to judge if something is correct politically, and a politically wrong thing is something we avoid to do. However, we should distinguish between these concepts:
l  Tolerance and advocacy, as we may live in peace with lesbians and gays, but we may not promote or advocate them both because we cannot get the majority to give in to the minority and because homosexuality plunges us in a confusion and a moral crisis
l  A melting pot, a mosaic and a random combination, as we like the idea of multi-culturalism but don’t want to be a melting pot or a chaotic mixture of everything (because we may like a orderly combined culture with one major theme just like a mosaic)
l  Vote canvassing and vote manipulation, as the latter will be used by politicians for the profit of a small group of people as possibly in the case of marijuana or the coming Pharmacare
l  Self-respect and sense of superiority, as some religion claims to be more superior to others and no one can slander or denounce it and come up with a bill to condemn the fear of that religion
l  Hate or discrimination and no participation, as some groups may label you as discriminating if you don’t join in them
l  Rule of majority and rule of fairness and justification, as sometimes the minorities are marginalized though it may be also incorrect for the majority to yield to every request of the minorities (the minorities’ interests should not be sacrificed for the majority, nor should the majority comply to every request or petition of a minority)

IV.             What We Could Do
As our government embraces more and more immigrants and refugees, it also entangles the cultures and customs of them. The author is urging the government to re-evaluate our cultures and beliefs and learn from our past successes in dealing with external cultures and consider encouraging the traditional Christian faith.

V.                Conclusion
Canada is an open and free country, but it is also one based on the rule of law and our traditional beliefs and values. As sung in the National Anthem, “O Canada, we stand on guard for thee.
God keep our land glorious and free!”[iii] Without God, the social infrastructure will not have a good foundation. We should not be so tolerant to tolerate the intolerant, and we need to have a culture to shape a better tomorrow.

[i] Please see Queen City Pride’s post on June 17, 2019 at 6 am, https://www.facebook.com/pg/QueenCityPride/posts/?ref=page_internal. Please note that the picture is taken from Brandon Harder’s article titled “the Regina Pride Parade in Pictures” published on the Leader Post on June 16, 2019, see the webpage https://leaderpost.com/news/local-news/the-regina-pride-parade-in-pictures.
[ii] Rosaria Butterfield: An Unlikely Convert: An Interview with Rosaria Butterfield, https://www.ligonier.org/learn/articles/unlikely-convert/.
[iii] O Canada, https://en.wikipedia.org/wiki/O_Canada.
Posted by Daniel Huang at 10:51 PM