Where is the Future of Hong Kong? （香港的未来在哪里） 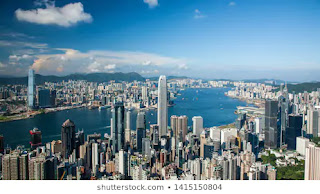 Abstract: This has been the 13th consecutive weekend of protests in Hong Kong. Though it is difficult to predict if the Hong Kong protest could evolve into an Arab Spring movement, many of the characteristics are the same. As the protest drags on, the likelihood to another Arab Spring is becoming larger and larger. The persistent violent protestors are reckoned to be selfish, jealous and ill-informed with the hope of a universal suffrage and release of all the people arrested without any punishment, or US Green Cards issued to them in the case of a military intervention. The status quo will certainly be ruled out as travelers are affected, businesses are affected, schools are affected, government is half paralyzed, and investment confidence is undermined. The independence option is ruled out as both international and Hong Kong laws do not allow it, and mainland China would not see it. The violent protestors in Hong Kong do not represent the future of Hong Kong. It takes both courage and wisdom to handle the protest, and a seamless cooperation between mainland China and Hong Kong would be highly desired.

Police made dozens of arrests on 31 Aug 2019 after an afternoon of unauthorized demonstrations, followed by clashes and stand-offs in the streets of central Hong Kong. Protesters were throwing petrol bombs at Nathan Road in Tsim Sha Tsui, while police were using "appropriate force" to disperse the protestors[i]. The protest organizers have urged the public to overwhelm road and rail links to the airport, potentially disrupting flights. It’s commented that these so-called peaceful protesters are covering those violent rioters to vandalize everything. Taken as an act of terrorism, if the blocking to the airport happened in the US, the police would have acted very strongly and quickly[ii]. This has been the 13th consecutive weekend of protests in Hong Kong. It all started in June over a controversial extradition bill, but evolved into a broader pro-democracy movement.

The Arab Spring was a series of anti-government protests, uprisings, and armed rebellions that spread across North Africa and the Middle East in the early 2010s. A major slogan of the demonstrators in the Arab world is "the people want to bring down the regime". The early hopes that these popular movements would end corruption, increase political participation, and bring about greater economic equity quickly collapsed in the wake of the counter-revolutionary moves by foreign state actors. Joseph Massad on Al Jazeera said the term was "part of a US strategy of controlling aims and goals" and directing it towards western-style liberal democracy.[iii]
In Egypt, there have been the huge economic structure and poverty problems, and the government in constant chaos[iv].

Thousands rallied across Pakistan on 30 Aug 2019 in mass demonstrations against Delhi's actions in Indian-administered Kashmir[v]. The demonstrations were the first in what will be weekly rallies held nationwide until Khan leaves for New York next month to attend the United Nations General Assembly, where he has promised to raise the Kashmir issue. Tensions have soared between the nuclear-armed rivals in the wake of Modi's order to strip India's portion of Kashmir of its autonomy and bring it under Delhi's direct rule. The demonstrations in Pakistan also came a day after its military announced the testing of a surface-to-surface ballistic missile, with the army's spokesman saying the weapon was "capable of delivering multiple types of warheads". According to Sumathi Subbiah, from the beginning, the UN Security Council framed the Kashmir problem as primarily a political dispute rather than looking to a major legal underpinning of the dispute[vi].

With foreign intervention, many small countries and regions have become independent yet poorer and poorer, with a few exceptions like Singapore. Mitchell SHARP, Canada’s former secretary of state for external affairs, addressed the question of how to live "distinct from, but in harmony with" the US in 1972. He rejected 2 options, status quo and a deliberate policy of "closer integration with the United States." Instead, he argued for a "third option" - to reduce the present Canadian vulnerability. The third option, Sharp insisted, was not anti-American; a stronger, more self-confident Canada would be a better neighbour. During 1972-76, the Foreign Investment Review Agency and Petro-Canada were established and Canadian businesses were discouraged from advertising on American radio and television stations[vii]. Some scholars argue, what is unfolding in Hong Kong is about far more than a regional power settling post-colonial scores. It is about the constitution of international order. The question of whether China can accommodate its rise to the international order seems now almost quaint. According to them diversification is a great economic temptation, and usually even good trade policy, but it’s not good foreign policy[viii].

Though it is difficult to predict if Hong Kong could evolve into an Arab Spring movement, many of the characteristics are the same, as the protest drags on, the likelihood to another Arab Spring is becoming larger and larger. As to the order, some countries believe in the jungle principle, and it is those developing countries that need more assistance.

Mentality behind the Protest

Some of the Asian Canadians do not approve of this chaos, and regard the persistent violent protestors selfish and jealousy. They are selfish because they vandalize properties, set arson, hurt passengers and policemen without any caring about anything while they are well-protected with helmets and masks. What they want can be either of the two: a universal suffrage and release of all the people arrested without any punishment, or US Green Cards issued to them in the case of intervention of military troops to settle the unending turmoil. They are jealousy because they envy the life under the flags of stripe as they fancy there should be more freedom and democracy if they only have the passports.

As for the Chinese government, it is unwise to use the troops because: 1) the Joint Declaration and the Basic Law has designated Hong Kong as special administrative region with a separate political and legal system under the “one-country, two-systems” principle; 2) the memory of the June 4 Event is still fresh and the status of Hong Kong’s international financial center and the prospect of Taiwan returning to mainland China may be jeopardized with resorting to military force again; 3) China could walk a hard stick with light touches, as Roosevelt once said, “speak softly and carry a big stick, you will go far”[x].

The Chinese government can solve the problem well if it can combine its quick decision-making mechanism and its wise use of information and strategy.

Discussion of the Future

The independence option will also be ruled out due to the following: 1) it is not allowed by mainland China under both the previous and present government, and it is also put evidently in the “one-country, two-systems” framework; 2) it is against Hong Kong’s present Crimes Ordinance, as any attempt, preparation or act with a seditious intention shall be guilty of an offense and shall be liable for a first offense to a fine of HK$5,000 and to imprisonment for 2 years, and for a subsequent offense to imprisonment for 3 years[xi]; 3) it violates Article 19 (3)(b) of International Covenant on Civil and Political Rights as the exercise of the right to freedom of expression shall be restricted for the protection of national security or of public order, or of public health or morals[xii].

Therefore, the last option is a more clarified and detailed implementation of the “one-country, two-systems” policy.

The violent protestors in Hong Kong do not represent the future of Hong Kong. It takes both courage and wisdom to handle the protest, and a seamless cooperation between mainland China and Hong Kong would be highly required.