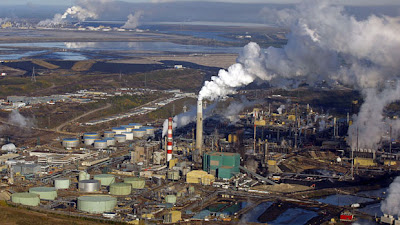 On the eve of NDP Leader Tom Mulcair's visit to Alberta's oilsands, a new report backs his claim that Canada's economy suffers from a form of Dutch Disease, which refers to the manufacturing decline that occurred in the Netherlands after a boom in natural gas exports in the 1970s[i].

A study released Wednesday by the Pembina Institute says Canada has come down with a unique strain of the phenomenon, dubbed "oilsands fever," that is producing near-term economic benefits that are often overstated. This strain could pose a significant risk to Canada's competitiveness in the emerging, clean energy economy, as oil exports raise the value of the Canadian dollar, which in turn hurts the economy in other parts of the country.

The report says these benefits are spread unevenly across the country and could be hiding economic turmoil down the road, and it suggests the federal government to create a rainy-day savings fund for oil and gas revenues, get rid of tax breaks for oil and gas companies, convene an expert panel on the oilsands and the economy, study regional competitiveness in an era of a high loonie and work on a national energy strategy.
But another report by the Macdonald-Laurier Institute says Canada's oil and gas industry is spreading the wealth by using the money earned from booming exports to buy goods and services from the rest of the country. The study found all provinces will enjoy benefits from oil- and gas-rich western provinces that far outweigh any ill-effects from a higher Canadian dollar.

It is not clear that if Muclair has been educated or not, but at least he was careful not to fan the flames of western anger (referring to AB and SK), according to Gillian Steward, columnist of the Star[ii]. AB’s NDP leader Brian Mason wasn’t so enthusiastic about the federal NDP leader’s remarks about Dutch disease and made it clear that “limiting Alberta’s opportunities” was not a solution. Alvin Finkel, an Edmonton historian and longtime NDP supporter, wonders how Mulcair is going to balance the provinces. “If he wants to maintain at least some western support, he has to promise that the monies pulled directly by the state from oilsands will be invested within the region for alternative energy startups, upgrading of oilsands oil, etc. Otherwise he does look like he’s simply trying to directly transfer wealth from Alberta and Saskatchewan to central and eastern Canada . . . ” Finkel said in an email.

The Organization for Economic Co-operation and Development warns in a report released Wednesday that the run-up in commodity prices is leading to an uneven economy in Canada[iii].

And it says the country needs to do more to develop non-resource aspects of the economy in order to maintain high levels of employment and an equitable distribution of wealth across regions.

"The export-oriented manufacturing sector had by 2011 shrunk sharply to only 12.6 per cent of total value added, down from a peak of 18.6 per cent in 2000. Its share of employment has also fallen substantially over the past decade from 15.2 per cent to 10.2 per cent and somewhat more than in the United States," it notes.

"Both outcomes have been clearly correlated with exchange-rate developments."

Instead, it advocates that Canada boost innovation and invest in churning out skilled workers. It said that would lead to higher productivity, which should benefit the non-resource sectors.

Jarrett said another way of tackling the issue is to increase equalization payments from wealthier regions to less affluent ones.

Well, whom should we agree with? To answer this question, we need to know the Canadian economic structure. Is it exported-oriented, or domestic-demand-oriented? Secondly, we need to know what roles western provinces play in the Canadian economy. Thirdly, we need to know what the extent of resource-based economy can be developed. Lastly but not least, we need to know the net result of oilsands development in the western provinces after considering the pollution effect. As for the first two questions, with solid research data, the writer can say for sure that oilsands development are positive for both western provinces and the rest of Canada. As for the third one, Ding and Field found out that either positive and negative effects can be detected using different measures. Wen and King demonstrated that with a bad system in transaction efficiency, a country rich in resources can incur the resource curse[iv]. As for the last one, as long as there is a feasibility study in place before the development including an environmental plan approved by ecologists, the development should be supported.

Have you ever thought of the situation of opening a window which lets in some flies? Do you ever shut the window due to the flies or do you just pick up a flyswatter to kill the flies while keep the window open? Also, do you think that equalization payments can stimulate the economic growth?