Questions Invoked by the Teacher's Termination 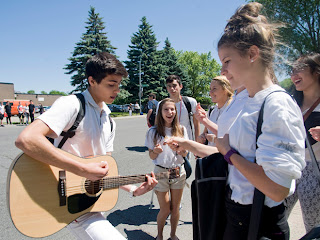 According to an article published by National Post sent from Montreal, the teacher who screened a video that police allege depicts the murder of Jun Lin at the hands of Luka Rocco Magnotta has been fired, the Marguerite Bourgeoys school board announced Thursday. Moreover,  Montreal police said criminal charges on the teacher are a possibility. The type of charge falls under the “offences tending to corrupt morals” in the Criminal Code.
“The unacceptable nature of the teacher’s action demanded an unequivocal response,” school board chairwoman Diane Lamarche-Venne said in a statement.
The 29-year-old teacher showed students in his Grade 10 history class the gruesome video on June 4 after they voted in favour of seeing it by a show of hands. The video shows a naked, bound victim being stabbed with an icepick, decapitated and dismembered.
Students had circulated a petition demanding that the teacher keep his job, saying they were the ones who had asked to see the video.
A protest was held outside the west-end Cavelier-De LaSalle High School around lunchtime today while much of the student body has signed a petition calling for the return of the teacher.

Though it is obviously inappropriate for students of a minor age to view violent and sexual videos, we may have several questions popped up in our mind:
1) How should we educate children if they hear of such infamous events?
2) Do children at the age 16-17 have the right to access to or to request information though it may be unpleasant?
3) If the teacher doesn't show the video in class, and if some kids in the class see the video at home online, don't you think the watching at school accompanied by the teacher may be better?
4) Should classroom teaching more student-oriented or teacher-oriented? Or, is there a line drawn between kids of different ages? For example, for kids of a minor age, the teacher has the last say; for kids over 18, the students have the last say.
5) Are there clear, well-defined and commonly understood and accepted rules and regulations for online content viewing and distribution?

If we can provide a satisfactory answer to these questions, we may be able to prevent such unhappy things to happen again as the students may regret the loss of a teacher and the teacher may face a life penalty of never being able to teach at school.
Posted by Daniel Huang at 11:38 AM